Just read a report about the rancher in Nevada whose son was tasered by the Feds for being on their own land and on land that the state of Nevada has allowed ranchers to use for grazing for years.  The Feds have come “swooping” in to protect some stupid turtle.  Another Fed grab of lands that should belong to the people.

Now, to be sure, I do not think all government personnel are thugs… however the less local they are, the more thuggish they seem to act.  You local cop or even your state police are probably people you know, and are at least people who live where you live.  But in this case we are talking Total Thuggery and Total Unconstitutional action.  Your essential Jack-Booted Federal Agent with a superiority complex.

This, of course, is not the first time Fed thugs have used tasers on innocent people – now don’t get me wrong, there are plenty of criminals who need to be tasered.  It would be nice if the Feds would spend their time and resources going after real crooks, for example the Mexican cartels that are crossing our borders – but instead they keep going after the people of this country.  But I digress…

It is time we put a stop to innocent tasing.  To that end lets explore Tasers and Taser-Proof clothing and how to make them both yourself.

This post will look at some interesting projects others have done – I’m not saying one way or another if I have done it.

The basic principles are simple – just short out the taser by making an electrical pathway that is much more conductive than the human body.  Tasers work on the principle of injecting a high voltage square-wave Alternating Current (AC) into the body by 2 contacts  so as to disrupt the central nervous system.  Shorting those terminals out removes the offending voltage from the body, while also possibly destroying the taser device (if it is cheaply made).

So first we need to know what we are dealing with… what is a Taser? 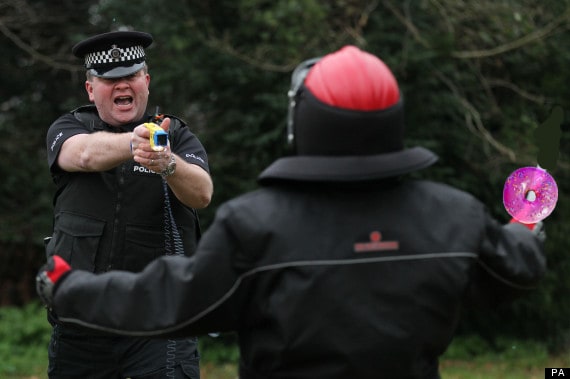 I said, hand over that doughnut!!!

Here are a few circuit diagrams so you can make one, take one apart, and basically understand what they are doing.

And here is an offending bit of description of the following taser device that is shown in block diagram:

Remember… if you disagree with your government, you are the “target”.

Conducted energy weapons (CEWs) (including the Advanced TASER(®) X26 model produced by TASER International, Inc.) incapacitate individuals by causing muscle contractions. In this study using anesthetized swine, the potential incapacitating effect of primarily monophasic, 19-Hz voltage imposed by the commercial CEW was compared with the effect of voltages imposed by a laboratory device that created 40-Hz square waves. Forces of muscle contraction were measured with the use of strain gauges. Stimulation with 40-Hz square waves required less pulse energy than stimulation with the commercial CEW to produce similar muscle contraction. The square-pulse stimulation, at the higher repetition rate, caused a more complete tetanus at a lower energy. Use of such a simple shape of waveform may be used to make future nonlethal weapon devices more efficient.

© 2013 American Academy of Forensic Sciences Published 2013. This article is a U.S. Government work and is in the public domain in the U.S.A.

Just from that we know that TASER uses 19 Hz monophasic (single phase) frequency in their devices. They have claimed in the past (as have others) that the specific “shape” of their devices square waves also help in making their devices more “impactful” – however I suspect that all they do is build a circuit (or use a micro controller) to induce a steep pulse at the beginning, ending, or both sides of the standard square wave pattern.  It really does not matter as the prior paper and this next one show that the most efficient pulse is a 40Hz Straight Square wave.

Electronic control devices (including the Advanced TASER(®) X26 model produced by TASER International) incapacitate individuals by causing muscle contractions. To provide information relevant to development of future potential devices, effects of monophasic square waves with different parameters were compared with those of the X26 electronic control device, using two animal models (frogs and swine). Pulse power, electrical pulse charge, pulse duration, and pulse repetition frequency affected muscle contraction. There was no difference in the charge required, between the square waveform and the X26 waveform, to cause approximately the same muscle-contraction response (in terms of the strength-duration curve). Thus, on the basis of these initial studies, the detailed shape of a waveform may not be important in terms of generating electro-muscular incapacitation. More detailed studies, however, may be required to thoroughly test all potential waveforms to be considered for future use in ECDs.

2010 American Academy of Forensic Sciences. Published 2010. This article is a U.S. Government work and is in the public domain in the U.S.A.

So, if you want to create a “taser proof” vest or clothing, you have to essentially short out the taser electrodes in a way that does not allow the power to go into your body.  Remember, your body is essentially a bag of somewhat salty water which makes it a rather crappy conductor, unless there is nothing else better.  Typically you don’t wear conductive clothing so you are essentially going to become a conductor… unless you have prepared.  A simple way to do this is to take your favorite jacket, tear out the lining (carefully and in 1 piece) and install carbon tape. 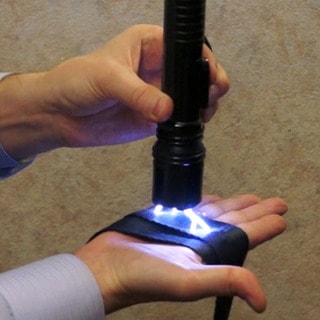 Tasers are no match for a real conductor!

After doing that, just make sure you are wearing your jacket whenever you get tased.