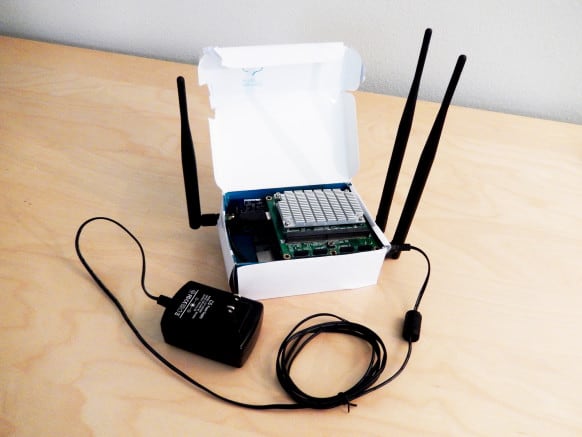 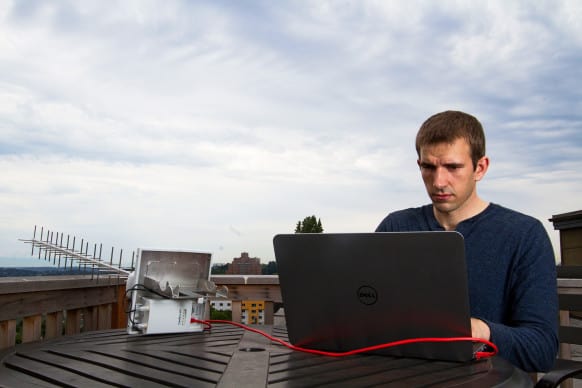 Here is the problem, apparently some unnamed legal entity and/or judge has issued a gag order against the company in an attempt to silence this information! Read here: Proxyham mysteriously vanishes!

So what are we going to do about it? Simple. I am going to start a series of blog posts here to show you how to build your own ProxyHam device. I invite anyone else who wants to, send me details of their similar devices and I will publish them as well!

I don’t give a (Insert bad language here) about the judges who issue such illegal, and unconstitutional orders.

I am going to repost the article here because it is possible that Wired may also get a gag order, so I am going to make sure the info gets out there:

At the upcoming DefCon hacker conference in Las Vegas next month, Caudill plans to unveil ProxyHam, a “hardware proxy” designed to use a radio connection to add a physical layer of obfuscation to an internet user’s location. His open-source device, which he built for $200, connects to Wi-Fi and relays a user’s Internet connection over a 900 megaherz radio connection to their faraway computer, with a range of between one and 2.5 miles depending on interference from the landscape and buildings. That means even if investigators fully trace the user’s internet connection, they’ll find only the ProxyHam box the person planted in a remote library, cafe, or other public place—and not their actual location.

Caudill, a researcher for the consultancy Rhino Security Labs, compares his tool to typical tactics to hide the source of an Internet connection, like using a neighbor’s Wi-Fi, or working from a coffee shop instead of home. But “the problem with Wi-Fi as a protocol is that you can’t get the range you need. If the FBI kicks down the door, it may not be my door, but it’ll be so close they can hear me breathe,” says Caudill. “[ProxyHam] gives you all the benefits of being able to be at a Starbucks or some other remote location, but without physically being there.”

ProxyHam, which Caudill says he’ll offer for sale at cost to DefCon attendees and will also teach users how to build with instructions on his website and ProxyHam’s Github page (both available after DefCon), is actually two devices. The first part is a box the size of a large dictionary, containing a Raspberry Pi computer connected to a Wi-Fi card and a small 900 megaherz antenna, all of which is meant to be plugged in at some inconspicuous public place—Caudill suggests a dark corner of a public library. On the other end of a radio connection, the user plugs in a 900 megaherz antenna into his or her ethernet port. (In the picture above, Caudill uses a giant Yagi antenna, but he says a much smaller $57 flat patch antenna works, too.)

Caudill intends ProxyHam to protect sensitive Internet users, such as dissidents and whistleblowers, for whom tools like VPNs and even the anonymity software Tor may not provide sufficient security. If an attacker can manage to install malware on the user’s PC, for instance, that malware can circumvent Tor and send the user’s IP address directly to the attacker. But with ProxyHam, that malware attack would only lead investigators to the ProxyHam device, not the user. “The KGB isn’t kicking in your door,” says Caudill. “They’re kicking in the door of the library 2.5 miles away.”

To avoid radio detection on the user’s end, ProxyHam’s wireless signals are designed to look indistinguishable from the many cordless telephones that use the same frequency. And Caudill says the rise of more internet-connected wireless gadgets will provide further cover for ProxyHam users over time. “There are a ton of devices jumping into that space and communicating there,” he says. “It’s not feasible to say ‘we’ll chase down everyone who has this device communicating on this frequency.’ It’s a needle in a haystack.”

No one should depend on ProxyHam alone—particularly until its security has been proven in real-world testing, says Micah Lee, a security technologist for The Intercept and occasional developer for the anonymous whistle-blowing software SecureDrop. But Lee points out that it can be used in combination with existing anonymity software like VPNs and Tor. “It seems like a thing to augment your Tor usage rather than replace it. In that sense, it seems like a good idea,” he says. Lee himself counsels anonymous leakers who use SecureDrop to send secrets to a news organization to first connect to a public Wi-Fi network. ProxyHam, he says, could accomplish something similar. “No matter how many hops over the Internet you use, if there’s someone spying on everything, they can connect all the dots. But if one of the hops isn’t over the Internet and is instead over a radio link, it’ll be a lot harder to connect those dots.”

The version of ProxyHam Caudill intends to sell at DefCon will be fairly basic. But in future versions he’s still developing, Caudill says the device will also include accelerometers designed to detect and warn users if it’s been moved from its hiding place. He’s even hoping to include a microphone that can act as a “black box” recorder to relay to the owner the last few moments of audio the ProxyHam hears before it’s disconnected. All of that, says Caudill, is intended to prevent investigators from discovering a ProxyHam and then tampering with it to eavesdrop on its communications or to trap a user who comes to fix or retrieve it.

Going to the trouble of buying and planting a ProxyHam device—one that if used safely, you may never see again—may sound like paranoia. But Caudill intends ProxyHam to protect the very most sensitive people on the internet, those for whom mere software protections aren’t good enough. “Journalists and dissidents in Arab Spring countries, for instance…these people have very high security requirements,” Caudill says. “This is that last-ditch effort to remain anonymous and keep yourself safe.”

Okay, now for technical details: This is from Errata Security website: ProxyHam conspiracy is nonsense

The talk was hype to begin with. You can buy a 900 MHz bridge from Ubquiti for $125 (or MicroTik device for $129) and attach it to a Raspberry Pi. How you’d do this is obvious. It’s a good DEF CON talk, because it’s the application that important, but the technical principles here are extremely basic.

NOTE: CCE Readers, here is the link to the device at NewEgg:Buy UbiQuiTi NanoStation

If you look careful at the pic in the Wired story on ProxyHam, it appears they are indeed just using the Ubuiti device. Here is the pic from Wired:

And here is the link to Ubquiti’s website: Ubquiti. Look at the top pic at the Device and the Yagi Antenna.

I don’t know why the talk was canceled. One likely reason is that the stories (such as the one on Wired) sensationalized the thing, so maybe their employer got cold feet. Or maybe the FBI got scared and really did give them an NSL, though that’s incredibly implausible. The feds have other ways to encourage people to be silent (I’ve personally been threatened to cancel a talk), but it wouldn’t be an NSL.

And finally, here is another post that explains much of the technology needed to build these devices using the Rasberry Pi, 35 dollar computer.