Okay I will be honest with you, I believe about 99% of the free energy advocates are either ignorant of basic electrical principles, charlatans, or are just plain nut-jobs. In fact even the Guru of Weird Science, Bill Beaty agrees – read his excellent post about Free Energy and the promoters of such here.

But John Bedini is a bit different.

He actually owns a company that back in the 80’s and 90’s that made some of the best audio amplifiers in the business.  These were the kind that were found in recording studios. He designed and built them.  He is a real electrical engineer.  His company was called Bedini Electronics and here is pic of just one of his awesome amplifiers. 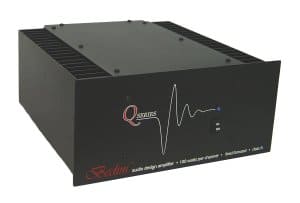 That, my friend, is a very nicely made amplifier!

So when he claims that he has found ways of producing “Scaler Fields” and “Longitudinal Waves”, any good scientist and experimenter should not just brush him off.  This guy has some serious street cred!

I plan on looking real hard a some of the stuff that has been attributed to Mr. Bedini as well as stuff he has actually said/did/designed/built in this burgeoning field of free energy and “Scaler Electrodynamics”.  Both of which are considered as nonsense by the established Science and Engineering worlds.

But the exciting discoveries in this world are never found where the “Establishment” is located, but always out on the lunatic fringe.  Unfortunately, as Mr. Beaty pointed out so eloquently, this is also where the scammers, con-men, and actual crazy people hang out as well.  Tread carefully!

Today I want to look at the so-called “Bedini Scaler Beam” Device. You can see a simple ascii drawing and description here, again by Mr. Beaty.  At this point I need to perform some clarifications…

Mr. Beaty is a great experimenter, builder, and thinker in his own right, however I have to take issue with his statement:

Here’s a suggestion for “scalar” experiments from a conversation with John Bedini.
Mr. Bedini encourages everyone to try this experiment, but warns us that this device
is patent applied for, so you should only build a single unit for your own use.
– Bill Beaty, 1/21/95

Um… I’m sorry, but with all due respect, nobody is going to be able to claim that gluing two magnets together in a bucking fashion and wrapping a coil of wire around it constitutes a “patentable” device.  Nope, sorry, but that is utter BS.  Make as many of these as you want, heck, sell them on ebay – I will (If I find out they actually do anything)!

It would be like me trying to patent the garbage can… oh wait, right, Apple already tried that.

So…anyway, I have reproduced this “Scaler Beam Device” in my own lab.

Using two Neodymium Magnets I pulled from an old disk drive I created a proto-type device.  Later, if it seems worth it, I will buy some block style magnets and build a much more robust version.

Even with the relatively small magnets I had, it was very difficult to get them to stay face to face in a “bucking” fashion (north to north or south to south).  I used a couple of zip ties to keep them together and wrapped some small diameter hookup wire around them.

Instead of using “motor noise” as shown in the original diagram, I opted to use a square wave pulse train generated from an old 7404 hex inverter hooked up as shown.

I used the above general oscillator circuit with a C of 22Nf and R1 and R2 of 2200 ohms.  This gave a 25% duty cycle at approx 30Khz. Here is the circuit layout on my breadboard (Note I am using a different power supply than the one on my breadboard because I wanted a higher voltage and more power to the Bedini coil). 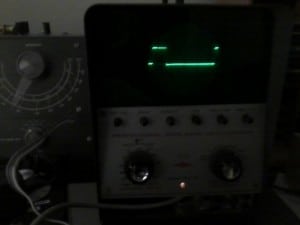 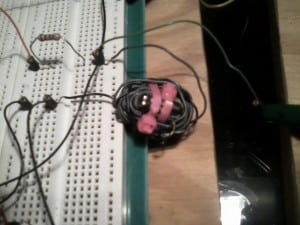 Here is a closeup of my “Bedini Coil” and breadboard of the circuit. As you can see I used 2 zip ties to hold these stubborn magnets together.  I wrapped the hookup wire around the assembly, and added a 100 ohm resistor in series as the coil did not have enough resistance to give a decent load to the oscillator – it acted like a dead short.  The resistor in series added enough load to actually pulse the coil.

I may actually perform the noisy motor test as well, but I think a controllable oscillator is a better lab test of this device.

Next is the waveform seen at the coil on the oscilloscope.

Waveform on the Bedini coil – note there are voltage spikes at each transition of about 6 volts both positive and negative.

What can be seen here is that the coil exhibits a somewhat unusual waveform that has a 50% duty cycle and had transition voltage spikes.  I can understand the spike, but the change in duty cycle is strange.

Conclusions: At this point I did not notice any unusual “Scalar Field” non-sense.  No “Men in Black” came storming into my lab demanding that I stop experimentation with this stuff, and there were no changes to CDs or the taste of wine in the house as suggested by Bill Beaty.  Instead, I believe I will build a more robust version of this device with configurable frequency, and voltage levels, and of course, better measuring techniques.

What I am interested in testing is if there are indeed “longitudinal Waves” coming from this device, then they should be able to penetrate a Faraday shielded box and be detectable inside.

Hey kids… so I built a new “Bedini Scalar Beam Device”! So that means I must be “Breaking Copyright”… oh right, this is not a copyrightable device…

Here is an experimental schematic of what we are trying to build here – I got this picture from another on the web performing this experiment – he decided to put a xenon flash tube next to the magnet for whatever reason, I just want to give you a gist of what this device looks like.

The “Scalar Beamer” – or maybe a special kind of strobe light?

So here is my new Scalar Beamer – and I used both the electric motor scheme as Bill Beaty suggested as well as the DC square wave pulse oscillator I built for the initial tests.

This has 60 turns of doorbell wire wrapped around 2 ceramic rectangular magnets I got at Home Depot. I got similar waveforms as before and no immediate effects however I did note that a standard antenna coil was not picking up very much on the oscilloscope which is unusual.  I need to get some time and build a better set of enclosed detectors as well as get some magnet wire to wrap the magnets with.  There may be some strange principles with a coil like this, and it is worth another look.