Back in my day (think 70’s and 80’s) we used to call table “scroll saws” jigsaws.  We called hand held “Jigsaws” Sabre Saws.  Well, I guess some all powerful authority decided that the names must be “switched all around” and now “Scroll saws” are the table variety and Jigsaws are the hand variety, and, well…

Scroll saws are a very nice tool to have in any Mad Scientist laboratory because of all the various things you can do with them outside of creating “scroll-work”… for example if you create printed circuit boards that are not square, but follow some weird shape due to the enclosure, or if you are making lost foam metal molds, or a variety of intricate cuts…. you need a precision scroll saw. sure you could get yourself a CNC water jet or some plasma cutter device and pay thousands, or… a scroll saw does the job much cheaper.

Problem is that a precision scroll saw is expensive.  Let me explain.

There are essentially 5 types of scroll saws out there. The spring tension saw, the parallel arm saw, the C-arm saw, hybrid parallel saw, and the oscillating saw. All of these saws have their pros and cons, and their basic configurations are shown here. If you look carefully you will see that each has issues with the saw blade that effect the precision of the cut.

The spring tension scroll saw is a common one from the 50’s and 60’s but is not seen that much today even though the basic configuration is quite simple.  While the blade stays in the same place during the entire period of motion, the problem is that the tension on the blade changes – being at it’s highest when in the down position, and lowest in the up position.  This means that when the workpiece is pressed against the blade, the tension is in a constant state of weak, then strong.  This means that the blade flexes, and the cut will not be as precise as it could be.  It also means that the blade weakens and breaks much earlier than it normally would if it were under a constant tension.  The overall precision of the cut is compromised. 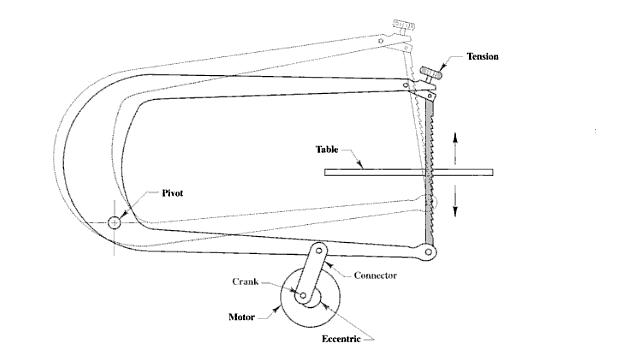 The C-Arm scroll saw as shown in the above picture has the advantage of keeping the blade tension constant, however as can be seen from the motion that is made, the blade position changes with respect tot eh cutting table and work-piece.  While very thin pieces may not be effected as long as the table cutting position stays constant as in the picture, thicker pieces will have issues with precise accurate cuts.  This becomes even more problematic if angles cuts are being used.  This is because the blade cantors back with the C-Arm as it goes through it’s periodic motion. 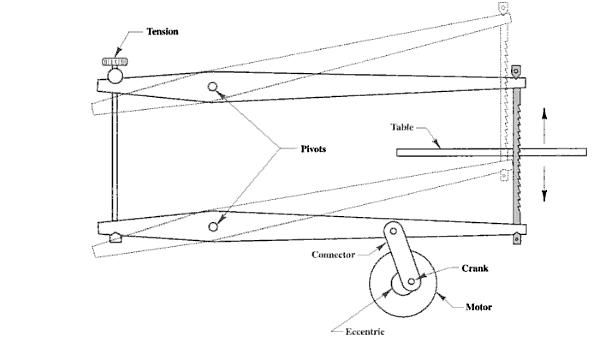 The parallel swing arm scroll saw is an improvement on the C-Arm, and also represents the oldest of the powered scroll saws in existence. Originally foot-peddle powered, these older saws had very deep throats upwards was three feet, making the offset that occurs when the saw moves upward or downward from center very minimal.  But as you can see in the picture above, this offset becomes much more noticeable as the arms become shorter as in modern day scroll saws.  Still, this is the mechanics of most inexpensive (under 200 dollars) scroll saws you can buy today.  Again, precision is lost because of the offset.

A variation on the parallel arm scroll saw is the hybrid shown here which uses “rockers” to move a cam like series of mechanisms that moves the bald up and down, but again, because the final rockers that attach to the blade are set on a pivot, the blade will have some front to back loss of precision as it rotates around the center of the rocker pivot. more expensive scroll saws employ this method of blade drive to greatly reduce vibration of the saw, however the precision is still an issue because of the aforementioned rocker rotation.

So in all these cases, we have the design of the saw effecting either the tension of the blade during it’s travel, or the actual position of the blade! What we want is for the blade to stay put and only move up and down – nothing else!

There really is only one way to reliably move a blade up and down under a constant tension, without any loss of precision and that is shown below : The oscillating band driven scroll saw.  These types of saws are the most expensive, but are also the most precise scroll saws that money can buy. 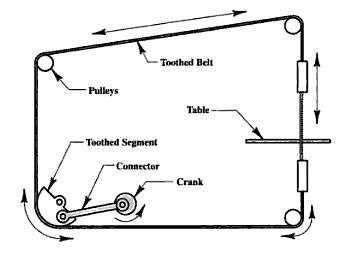 The oscillating band scroll saw – most precise money can buy.

Here is the deal: I needed a scroll saw.  I wanted one that was precise.  I’m a cheapskate. I like a challenge.

I decided to build my own.

I decided to build a precision oscillating scroll saw using a hybrid design that combines the band of the standard oscillating saw as shown above, and the “main rocker” idea of the hybrid swing arm saw.  Below is a simplified drawing of the saw I am building followed by the actual build itself.

My version of the saw uses the rocker from the hybrid parallel arm saw, but then connects to the blade via a steel cable under tension as opposed to a continuous belt or band.  Using brass sliding door pulleys and a tension spring (not shown).  My current build progress is shown below.

Collection of junk to start with.

The collection of stuff I had on hand – those aluminum tubes I found in a dumpster next to house construction – by the way: House construction dumpsters are a wealth of great free stuff – but get permission first!  Usually they don’t mind because they have to pay a fee for every pound, and anything you take saves them money! 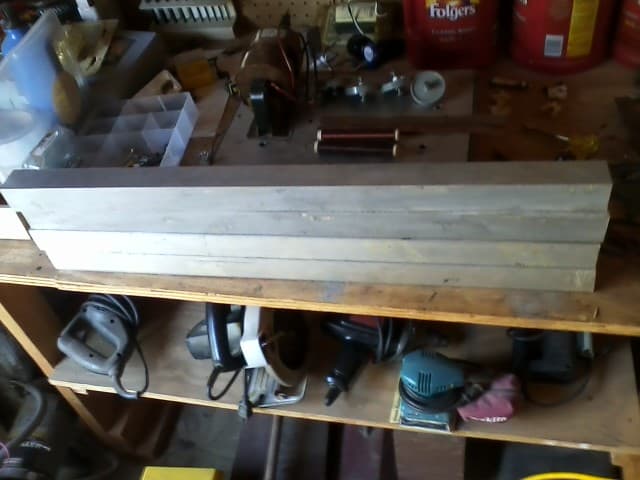 cleaned up and cut to length.

By the way, you may have noticed behind the staks of cut tubing that I am building a mini Tesla supply – those door-knob caps are from Russia, bought them about a year after Chernobyl – I wonder where they came from? 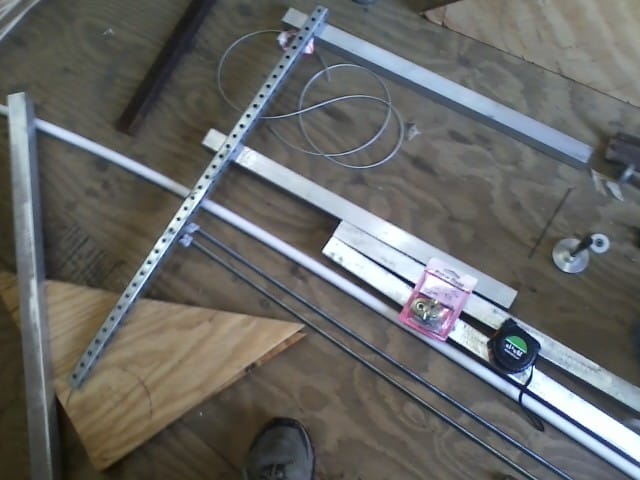 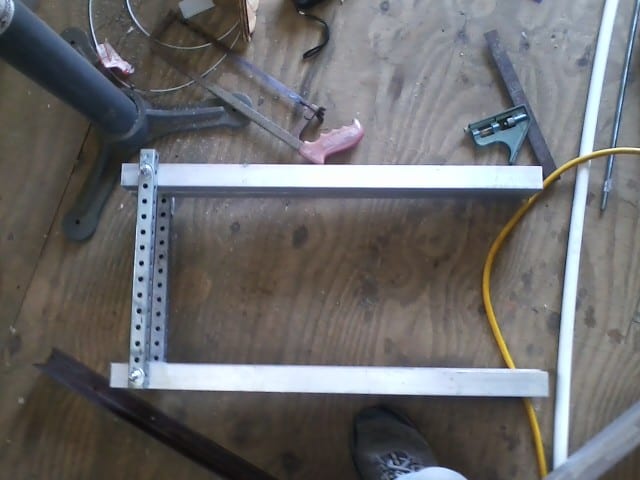 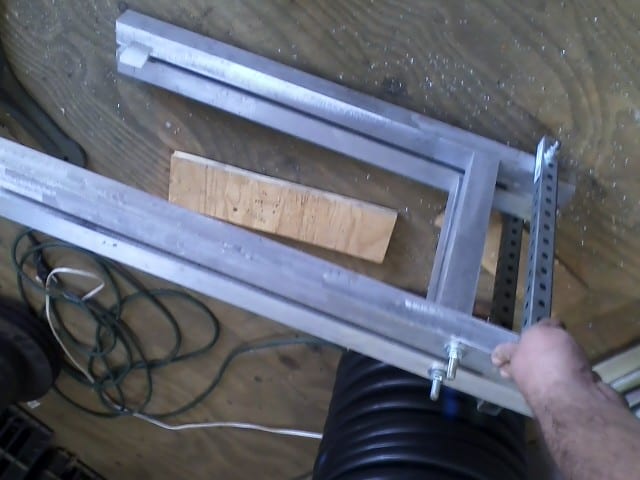 The combination of the two sets of struts makes the cantilevered arms of the saw very stiff. 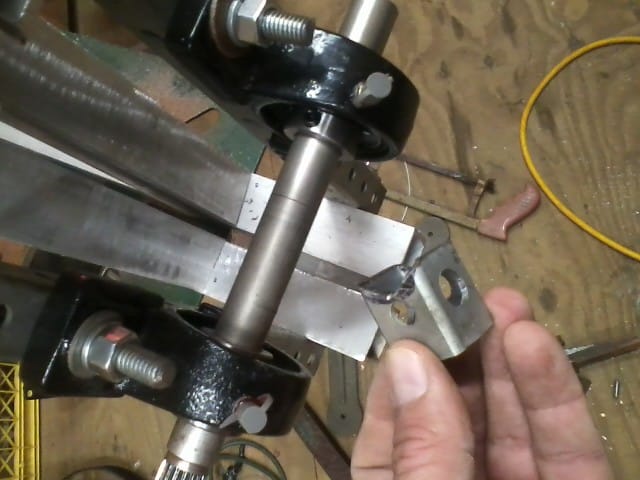 The section for the rocker arm to be mounted to the shaft. Got to get the welder out! 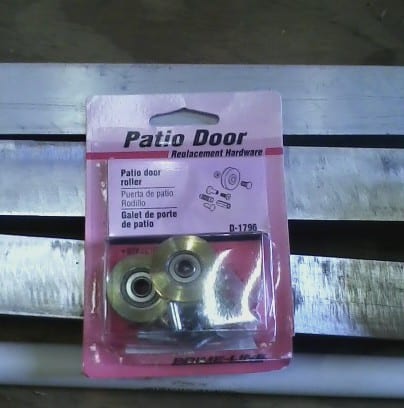 Here are the brass pulleys for the saw… 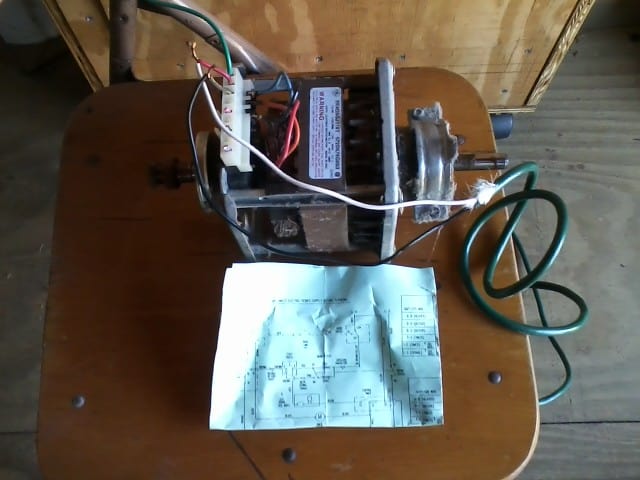 UPDATE! 03/13/2015 – nope, I still haven’t finished this thing, and I really need to because I really need a good jigsaw! Just too much stuff to do!