I like a good smoked cheese… Problem is, when you buy it at the store, it is very expensive.  Then you find out (if you care to look) it’s not really smoked at all! (at least not most of them).  No, instead most so-called “smoked cheese” you get at the store has been “Flavored” with liquid smoke, and then it’s been brined in a “colorant” that makes the outside brownish to give it that “Fresh from the smoker” look.

Pish -Tosh to all that! I want real smoked cheese!

This can smoke your ribs… but not your cheese!

What to do?  Well you cant smoke cheese in a traditional hot smoker, such as a bullet smoker:

Not unless you like a burned, melted mass of glop.  I don’t prefer that…

No, Cheese must be smoked in what is known as a “Cold Smoker”.  I decided I wanted to smoke cheese and a variety of other things so it was time to build one of my own. So I decided to build mine as a 2 by 2 by 4 foot box out of scrap plywood as seen here.

The Back of my smoker sticking out of my workshop on a cold day.

Here are several more pictures of the smoker…

Inside shot of the smoker showing racks and the smoke distributor on the floor. 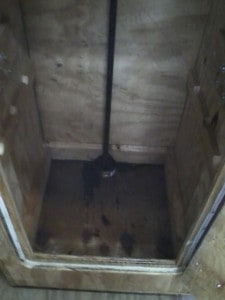 This shows the smoker with the racks and the distributor removed. Note the creosote collector – some spilled out when I was moving the smoker.

The smoker has a “smoke distributor” on the bottom – which is basically a false floor with large holes cut out to allow the smoke to permeate the entire box.

The smoke pipe runs down the entire length of the smoker so that the smoke cools, and so that creosote (which makes food bitter) is condensed and collected in a little tuna can at the bottom.  This has to be cleaned out after every smoking session.

The racks are 1.5 inch dowels that sit in cutouts on the side of the smoker.  The food to be smoked can be laid directly on the dowels, or (in the case of cheese and smaller items) placed on dollar store cookie cooling racks that then sit on the dowels quite nicely.

The door seals shut by using 2 lengths of cotton clothesline.  The clothesline seals against the door when it is shut for more or less an airtight seal. 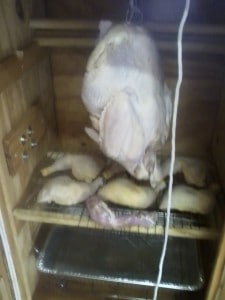 The Smoker loaded up with some chicken and a small turkey.

When loading up the smoker with meat, I always keep a drip pan underneath to try to keep as much of the raw meat drippings getting in the wood.  You cant stop it all. so you wipe down the inside with Clorox between smoking sessions (not needed when doing things like cheese or when smoking salt).

Now for the most important part of the smoker – the smoke generator!

The smoke generator is the box that sits atop my smokier, raised up in the air. 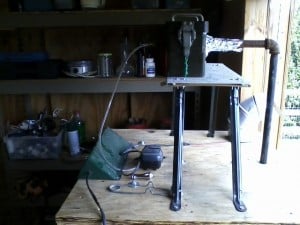 I could have gone the rout of using a commercial smoke generator such as the “Smoke Daddy” Cold Smoke Generator but that would not be in keeping with my nature of “Build your own” – besides, the smoke daddy compels you to use their special “smoking wood sawdust chips”.  I wanted to use any kind of wood I can purchase from local sources, or cut from trees such as apple orchards, etc.

So, I built my own from an old Army Equipment box.  The way a smoke generator works is by using a negative pressure venturi inside an enclosed container which is where the smoking chips are burned without oxygen. The box is an hardened aluminum box with snap-down lid. The iron pipe goes through the center of the box, and where it passes through the box there is a hole. The arraignment looks like the schematic shown here.

The venturi (the blue tube that comes to a point in the diagram) pulls the smoke and keeps just enough air flowing into the box to keep the coals going once they are started from the two “touch-holes” on the outside of the box.  What happens is that the air moving through the venturi causes a vacuum in the larger tube which then pulls smoke and air from the seal box into the larger tube which then enters the box.  The larger tube is over 4 feet long so that the smoke cools down, and releases much of it’s creosote (a bitter chemical you don’t want on your food). 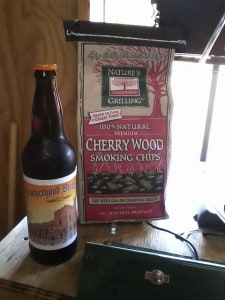 The smoke then proceeds into the smoking box, where it emits from the base as cooled smoke.

Shown here, I am using Cherry Wood Chips purchased at my local “Harris Teeter” Grocery. The large beer next to the smoking chips is a delicious brown ale my brother Jamie made and bottled himself – nothing goes better with smoke and meat than a good, ice cold brew!